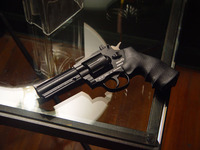 The gun violence in Chicago has been a great source of concern among the citizens and politicians in Illinois for a long time.  Every day we are inundated with news of shootings and homicides throughout the City. When the weather heats up we know that the number of shootings will go up.  On Monday morning we open the paper to find out how many people were shot and how many were killed over the weekend.  In the effort to come up with a way to stop all the shootings, we need to understand how illegal guns are making their way to the streets of Chicago.  Illinois has some of the most restrictive gun laws in the United States.  To own a gun in your home, Illinois requires that you get a Firearm Owners Identification (FOID) Card which requires that a thorough background search be conducted by the Illinois State Police.  FOID cards can be revoked for good cause by the Illinois State Police.  Citizens are generally not allowed to carry a gun outside their home unless they have an FOID Card and are legally transporting it, or they obtain a Conceal and Carry Permit.  To obtain a Conceal and Carry Permit you have to apply to the Illinois State Police, submit to a thorough background search and supply your fingerprints, and attend and complete gun training classes. Illinois was the last state to allow conceal and carry, and that was only after the Federal Courts ordered Illinois to do this.

In spite of some of the nation’s strictest gun laws, Chicago has established a reputation as America’s deadliest city.  Chicago Police report that in 2015, over 2,900 people were shot and 470 people were murdered.  In 2016, there were 762 homicides, 3,550 shooting incidents and 4,331 shooting victims. 2016 was the deadliest year in Chicago in 20 years.  Chicago recently saw it’s 500th murder of 2017.  These statistics, coupled with the strict Illinois gun laws, have become an example cited by gun rights activists to argue that gun control legislation doesn’t work.  But a closer look at some of the evidence concerning where these guns are coming from tells us a different story.

According to the FBI, roughly 60% of guns used in crimes in Illinois were from out of state.  The overwhelming number of those guns flow into Illinois from states that have much less restrictive gun laws.  Most of those out of state guns came from Indiana, which is next to Illinois.  Second place goes to Mississippi and third place goes to Wisconsin.  The FBI data suggests that there’s lots of trafficking of guns within Illinois but point out that it’s very difficult to trace those guns once they get into the state because Illinois does not require registration of guns, does not license or regulate gun dealers, doesn’t limit how many guns can be sold at one time and does not require background searches on gun sales that are not conducted at a gun show.  Indiana has really lax gun laws.  Gun dealers are required to perform a very basic background search while a vendor can sell their “private collection” to anyone at a gun show without any background search whatsoever.  So someone can buy an assault rifle at a Crown Point Indiana gun show without any background search, and drive an hour into Chicago, where assault rifles are banned.  A 2015 study by the University of Chicago suggested that only 11% of guns involved in crimes in Chicago were purchased through federally licensed gun dealers, which require background searches.  In 2014 the Chicago Police reported that roughly 60% of guns used and recovered from crime scenes between 2009 and 2013 were purchased outside of Illinois.  Exact figures are hard to pin down but it is clear that the vast majority of guns making their way to the streets of Chicago are coming from outside of Illinois.

The significance of these figures is that unless national standards are imposed, there’s no law or amount of regulation in Illinois that is going to stop guns from making their way into Chicago and being used in shootings and murders.  Instead of gun rights activists pointing to Illinois strict gun laws to argue that they don’t work, they should point to states that have lax gun laws as an example of why such stricter laws are needed to stop, or at least slow down, the rising numbers of shootings and murders in Chicago.

If you are being charged with a UUW, you can contact James Dimeas anytime for a free and confidential consultation.  You can always speak to James Dimeas personally by calling him at 847-807-7405.