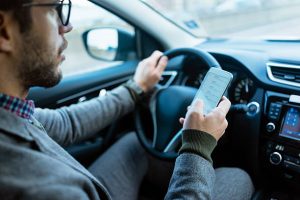 As of July 1, 2019, Illinois has become a “Hands-Free Zone”. In 2010, texting and driving was outlawed in Illinois.  In 2014, using your cell phone without a hands-free device was outlawed. But apparently, that was not enough. In 2018 the Illinois Legislature enacted a new Distracted Driving law that substantially increases the penalties for using a cell phone while operating a vehicle on Illinois roads which could lead to the suspension of your Illinois driver’s license.

What is Allowed and What is Not Allowed

Exceptions – When Can You Use Your Phone

You can use your phone while driving under certain specific and limited situations. The exceptions are as follows:

-If you are a law enforcement officer or an operator of an emergency vehicle, you can use your cell phone if you are performing your official duties.

-You can use your phone if you are reporting an emergency on the roadway.

-You can use your phone in hands-free mode which includes using a headset or a Bluetooth system integrated with your vehicle.

-You can use your phone when your car is on the side of the roadway in Neutral or Park.

– You can use your phone if the normal traffic is a obstructed by something like a train and your vehicle is in Neutral or Park.

If you are being charged with Distracted Driving for using your cell phone while driving, or have been issued a traffic citation, you can always contact James Dimeas for a free and confidential consultation. You can always talk to James Dimeas personally by calling him at 847-807-7405.

Using an Electronic Device While Driving, Even if You’re Just Holding it-Becomes a Moving Violation in Illinois, The Chicago Tribune, by Suzanne Baker and Javonte Anderson, June 28, 2009.

This is NOT a Simple Speeding Ticket, Chicago Criminal Lawyer Blog, by James G. Dimeas, April 19, 2019.

When Can Speeding Be a Crime in Illinois, Chicago Criminal Lawyer Blog, by James G. Dimeas, September 20, 2018.