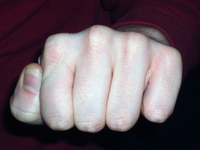 An Introduction to Domestic Battery in Illinois

A criminal charge of Domestic Battery is a very serious criminal offense in Illinois.  In recent years, public attention has been focused on Domestic Violence.  I noticed the increased attention on Domestic Violence cases after the infamous OJ Simpson case. State legislatures throughout the United States have passed laws which seek to punish crimes like this more severely and to try to put an end to this crime. This is true in Illinois as well.  Laws have been changed to make it easier for a spouse to obtain an Order of Protection.  Laws have been enacted to require the placement of GPS tracking devices on people have been ordered to stay away from victims.  Penalties for Domestic Battery crimes have been stiffened to impose harsher penalties on people convicted of Domestic Battery. Local prosecutors have established units within their offices that specialize in prosecuting Domestic Battery crimes and specific courtrooms have been established in most counties that only handle cases like this.

This article will discuss what the crime of Domestic Battery involves and the possible penalties.

What is Domestic Battery in Illinois?

Most Domestic Batteries are Misdemeanors

The majority of Domestic Batteries are Class A misdemeanors.  The maximum punishment for a Class A misdemeanor is up to one year in county jail and a maximum fine of up to $2,500.  But what is significant about a misdemeanor conviction for Domestic Battery in Illinois is that the charge can never be sealed or expunged. A conviction for Domestic Battery can never be removed from your record, unless you are able to get a pardon from the Governor, and will follow you around for the rest of your life.  It can be viewed by the public, employers, credit agencies, schools, government, landlords, etc.

When Can a Domestic Battery be a Felony?

What is Aggravated Domestic Battery?

What is the Sentence for Aggravated Domestic Battery?

The Domestic Battery laws in Illinois are pretty straightforward but require that any attorney handling such cases understands what they are doing.  The litigation involved in such cases can be tricky and requires not just an understanding of the various statutes cited above, but of the psychology surrounding these types of cases.  These offenses carry serious consequences.  Unlike most misdemeanors court supervision is not an option in Domestic Battery cases.  This takes away some negotiating options and applies serious consequences that cannot be bargained away.  Some of the felonies carry mandatory prison sentences.  It is critical that you hire an experienced attorney who knows what they are doing.

If you are being charged with a Domestic Battery, you can contact James Dimeas anytime for a free and confidential consultation. You can always talk to James Dimeas personally by calling him at 847-807-7405.

What Does it Mean to be Guilty of Interfering with the Reporting of a Domestic Battery, by James G. Dimeas, Chicago Criminal Lawyer Blog, October 11, 2017.