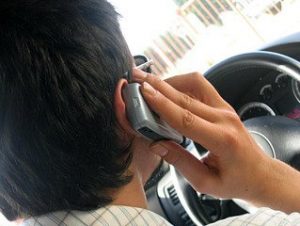 Illinois does not allow motorists to use their cell phone for talking, texting, or using any other means of electronic communication while they are operating their motor vehicle on a public road. The only way you can use your cell phone while driving is through Bluetooth technology, provided that you are 19 and over. In the last couple of years, tickets issued for using cell phones while driving have become common. The laws regarding use of a cell phone while driving have undergone several changes throughout the years. As a result, many motorists are not fully aware of what the rules are when it comes to using their cell phones while driving. Most of the clients who I meet for cases like this frequently tell me that they did not know how restrictive the cell phone usage laws are in Illinois. I want to take this opportunity to explain the cell phone Distracted Driving law in Illinois so that you know what is allowed and what is not allowed in Illinois.

What Is Not Allowed

-All drivers are prohibited from using a cell phone (even hands-free) when in a school zone and construction zone.

-You cannot use a cell phone to take pictures or record a video within 500 feet of the scene of an emergency.

-School bus drivers are prohibited from using any cell phone whatsoever, including hands-free.

-58% of accidents involving teenage drivers involve the use of cell phones. Therefore, drivers under the age of 19 are not allowed to use their cell phones for any reason, including hands-free.

-You are allowed to use your cell phone to report an emergency situation.

-You are allowed to use your cell phone if your vehicle is parked on the shoulder of the roadway.

-You are allowed to use your cell phone if your vehicle is stopped in traffic that is being obstructed for some reason, provided that your vehicle is in neutral or park.

-You can use your GPS, or a navigation application on your phone, as long as the device is mounted in your vehicle and not being touched, except to turn the device on or off.

– You are allowed to use a CB radio or a mobile radio transmitter while operating your motor vehicle.

Can I Use a Wired or Wireless Headset While Driving?

Yes, provided that the device is placed in only one (1) ear. If you are using a headset on both ears, you will be ticketed for Distracted Driving. This is probably the most commonly misunderstood prohibition when it comes to using your cell phone while driving.

Can I Be Pulled Over Just For Using My Cell Phone?

Yes. This subject is another major source of confusion and misunderstanding for Illinois motorists. When the first laws were enacted in Illinois to deal with cell phone usage, police officers were not allowed to pull over and ticket drivers merely for using their cell phones. In other words, a violation of the cell phone law alone could not be the primary reason for a motorist to be pulled over. You had to be pulled over for another reason, such as speeding, and the cell phone violation ticket was the secondary reason for being ticketed. Since the early laws were enacted, they have been changed to allow the police to pull you over for using your cell phone. Using your cell phone can now be the primary reason for you being pulled over. It can even be the only reason.

Yes. The same rules that prohibit the use of handheld electronic devices apply to CDL holders. However, CDL holders are allowed to use a device to read messages that is permanently attached to the vehicle that is designed to receive messages and is not bigger than 10 inches by 10 inches. A conviction for using a cell phone for a CDL user is now considered a major violation which could lead to the suspension or revocation of your CDL license. A CDL holder who is convicted of two serious moving violations within 3 years will have their CDL license suspended, or disqualified, for two months. A third conviction within 3 years will lead to a four-month suspension, or disqualification, of your CDL license. A CDL holder will also face penalties from the Federal Motor Carrier Safety Administration (FMCSA), the federal agency that regulates CDL holders, that could add up to up to $2,750 in fines. Your employer could be find up to $11,000 if they were found to be at fault for you using an electronic device while driving. The CDL penalties will apply to a motorist regardless of whether they were driving a commercial vehicle or their personal vehicle at the time of the violation.

If you receive a cell phone Distracted Driving ticket, you can contact James Dimeas anytime for a free and confidential consultation. You can speak to James Dimeas personally by calling him at 847-807-7405.