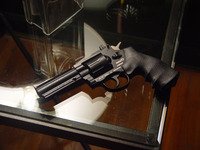 This question cannot be answered with a simple yes or no answer. Unfortunately, the Illinois Unlawful Use of a Weapon (UUW) statute is a little complicated and requires an explanation. Another question I frequently get asked is:  How do I legally transport a handgun in Illinois?  Here it goes.

To be able to legally own a firearm in Illinois, you must obtain a Firearm Owner’s Identification Card, which is referred to as an FOID card.  To obtain an FOID card, you must fill out an application with the Illinois State Police, pay a small application fee, provide a current color picture of yourself and wait for the Illinois State Police to conduct a very thorough background search.  If they approve your application, they will mail you a card which has an expiration date on it.  The FOID card allows you to legally own a firearm in your residence in Illinois.  Until 2013, it was illegal to carry a loaded gun in public anywhere in Illinois.  In 2012, the Federal Court of Appeals ruled that Illinois was violating the Second Amendment to the Constitution by not providing a mechanism by which citizens of the state would be allowed to carry a concealed firearm in public.  Later in the same year, the Illinois Supreme Court agreed with the Federal Court of Appeals and ruled that the Illinois Unlawful Use of a Weapon Statute was unconstitutional because it did not provide a way for citizens of Illinois to lawfully carry a loaded gun in public.  The following year, the Illinois Legislature enacted a Conceal and Carry statute which provided for a way for citizens of Illinois to lawfully carry a loaded concealed firearm in public.  Illinois became the last state in the country to provide for conceal and carry.

So, the bottom line is that if you want to transport your gun from your house to the gun range and you want to be fully compliant with the law, make sure that you have a valid and up-to-date FOID card on you. Make sure that the gun is not loaded.  Put the gun in a case.  You can get away with leaving it in the glove compartment but you should have a gun case.  You can have the ammunition in the same gun case provided that the unloaded gun in a case is not immediately accessible.  You should keep your gun it in the trunk and not in the passenger compartment of the car.  When it comes to transporting a gun if you use common sense you should be okay.

If you are being charged with a UUW, you can contact James Dimeas anytime for a free and confidential consultation. You can always talk to James Dimeas personally by calling him at 847-807-7405. James Dimeas has the experience and qualifications with UUW cases that you need on your side!