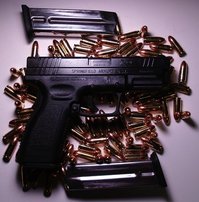 This new law enjoyed broad bipartisan support in Springfield, something that has been very rare in Springfield in recent years.  This new law was strongly supported by Chicago Mayor Rahm Emanuel and Chicago Police Department Superintendent Eddie Johnson.  Chicago officials are desperately trying to do something to deal with the out-of-control gun violence in Chicago.  It’s possible that this new law will do little, or nothing, to stop the gun violence in Chicago, but the politicians want to be seen as trying to do something.  In spite of the strong bipartisan support, our elected officials could not help but let this new law get caught up in the partisan bickering which has handicapped Springfield and endangered the health of the State of Illinois. Governor Rauner and Mayor Emanuel have been bickering over many issues concerning the funding needs of the City of Chicago.  Most recently, Governor Rauner has indicated that he would like to sell the Thompson Center in downtown Chicago.  According to Rauner, the possible sale of the Thompson Center could fetch the State of Illinois as much as $300 million.  Mayor Emanuel has been placing obstacles in front of Governor Rauner to stop any sale of the Thompson Center.  Most recently, Mayor Emanuel threatened to hold up zoning laws as an obstacle to allowing Rauner to sell the Thompson Center.  Governor Rauner wanted Mayor Emanuel to come to Springfield for the signing ceremony to show the voters that progress was being made in bipartisan efforts to do business and work past differences in Springfield.  Mayor Emanuel indicated he would not attend a signing ceremony in Springfield with Rauner and accused the Governor of threatening to veto a 911 bill for Chicago that would raise phone bills but provide more money for Chicago’s 911 system.

At the end of the day, the bickering politicians but aside their petty partisan fight and Chicago Police Department Superintendent Eddie Johnson attended a quickly arranged signing ceremony in Springfield. However, Mayor Emanuel did not attend.  In order to get support for this legislation, the new law also makes other changes to the law.  This new law gives greater power to the Illinois Department of Corrections to give sentencing credits to inmates who have been sentenced to prison.  This may allow some inmates to be released earlier from state prison.  This new law also appears to give more options for first time offenders to address the causes of their crime.  We have to see, what, if any options will be available for first-time offenders to avoid jail and a possible criminal conviction.  These changes appear to be trying to take steps towards lowering the prison population and the costs associated with the criminal justice system.  This effort seems to be a concession towards those legislators concerned with the cost to taxpayers for housing inmates in state prison.  I saw a recent survey that it costs the State of Illinois about $25,000 a year to house an inmate in State Prison for one year.  Another change to this law creates a task force within the Illinois State Police to help combat gun crimes.

If you are facing UUW or Unlawful Use of Weapon by a Felon charges in Chicago, Cook County, DuPage County, Kane County, or Lake County,  you can contact James Dimeas anytime for a free and confidential consultation.  You can speak to James Dimeas personally by calling 847-807-7405.

Rauner Signs Crime Bill, Favored by Emanuel, That Cracks Down on Repeat Offenders, by Monique Garcia and Kim Geiger, The Chicago Tribune, June 23, 2017.

Can I be Guilty of a UUW by Just Having a Gun in My Glove Compartment?, by James G. Dimeas, Chicago Criminal Lawyer Blog, May 2, 2017.